YouTube Logo’s body is obviously the YouTube Logo, the design used for the play buttons. It has a white triangle in the middle of a red rectangle. He has arms and legs.

YouTube Logo may seem like a nice guy, but he has a different side. He often bullies people for his own gain, and uses his good side to make himself look like a good person. However, people like Christmas Bauble can see through his disguise, and can expose him. This means that he is constantly having to shoot down these attempts at destroying his reputation. 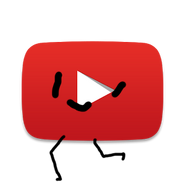 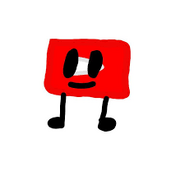 Im not evil!
Add a photo to this gallery
Retrieved from "https://objectshowfanonpedia.fandom.com/wiki/YouTube_Logo?oldid=466992"
Community content is available under CC-BY-SA unless otherwise noted.