Woody, labeled The A Plus, is a contestant in Battle for Dream Island. In BFDIA, Woody failed to join with 266 votes, either way he was deceased during the time making him disqualified.

He is as his name suggests, wood. Not necessarily one, but a type that's called a balsa. One that's quite light-weighted referencing to his fragile appearance and lack of physical strength.

Woody was eliminated in the episode Bridge Crossing, as he lost the game in all of the three turns, making him the lowest ranking contestant in BFDI. He eventually appeared in the finale, rooting for Leafy to win (but unfortunately Firey did).

He returns in IDFB, alive probably after being revived in the events of The Long-lost Yoyle City.

Woody's appearance has caused many people in the fandom has accused him of being 'bread' (despite his bread-like appearance).

Woody developed panophobia (afraid of everything), probably not at a young age, if not probably during an event causing this.

Despite his phobia, he is heard to often be either screaming or showing a sign for panicking. Many have bullied him because of this and yet he has lacked social skills and is usually considered useless, despite his fears.

Notably, he's also afraid of others that are physically weaker than him, for example, Bubble, sometimes even afraid of things such as the number 5 or the color grey, which is harmless. This can also be an example of his childish behavior. Either way, he's gentle, friendly and soft-hearted. Though despite his soft nature, he can also be violent if out-of-character whereas he slaps Needle when voting for Firey.

In BFB 8, he developed anti-phobia.

Where Woody Is From

Woody and Leafy barely interact, but when they do, they are frequently on good terms with each other. Leafy at first, gave Woody a chance to live his life happily (which did not turn out so well). Though the only time where they are shown to not be in a friendly term with each other is where Leafy chooses Rocky over Woody.

In The Return of the Hang Glider (Part 1), Woody roots for Leafy to win over Firey and Bubble and also slaps those of who do not support Leafy in the finale.

Tennis Ball and Woody rarely interacted, so their relationship is barely explored.

In The Plunge (Part 1), when Woody was kicked by Teardrop, Tennis Ball told Teardrop to calm down. Though in the obstacle course, he shows no sign of concern when Woody is about to collide with Rocky.

Woody is afraid of fire, but either way, they both never interacted throughout the series (they have but barely shows any contact with each other)

Blocky takes advantage of Woody's soft nature and is bullying him for enjoyment, though sometimes he can get serious and kicks Woody for real. He never tolerates Woody and continues to insult him wherever he can.

Woody generally dislikes Blocky, as seen in the beginning, Blocky quickly latches onto Woody but not in a good way. Throughout the series, Blocky is shown to have violently kicked Woody several times and has bullied him most of the time. When Woody receiving more votes than him in the final rejoining ceremony, Blocky angrily kicks Woody in jealousy.

Overall, Blocky and Woody are not friends in which, they both dislike each other.

Woody and Pin are not in good terms with each other except in BFB it's the opposite. At the beginning of the series, Pin shows disgust towards Woody, despite his fear of everything. Woody, on the other hand, has a fear of sharp things, in which that includes Pin and Needle.

In Barriers and Pitfalls, Pin doesn't care about Woody at all and just carry on without him. When he's about to climb her, she shows extreme disgust and shoves Woody out of the way, resulting to his loss.

In Are You Smarter than a Snowball?, Woody is shown to be quite anxious and Pin does nothing but continues to bully Woody, kicking him in the process which results a hole (that Woody unintentionally made). After this episode, they barely interacted.

In Bridge Crossing, Woody was eliminated, which overjoys Pin.

In Take The Plunge (Part 1), Woody is shown to have a sign of affection towards Teardrop, in which Teardrop does not. Despite this, Teardrop violently kicks Woody in annoyance. After this, they both aren't in good terms and does not interact any further.

In Infinity Gag, Woody is shown to have a sign of affection towards Bubble, in which Bubble does the same.

Woody's body before landing on Rocky 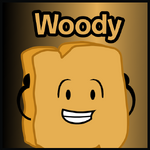 Woody's body before Bell dented him

Woody from a side view

Woody in Battle for BFDI

Woody in BFB after being dented by Bell

Woody putting out his hand 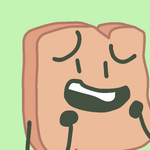 Something that looks like Woody's body in the Goiky Canal

A Woody animation by User:TheCherryWHY.

In Jacknjellify's War of The Worlds

Characters
Retrieved from "https://objectshowfanonpedia.fandom.com/wiki/Woody?oldid=493511"
Community content is available under CC-BY-SA unless otherwise noted.