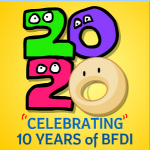 Hi everyone! It's me, the original creator of Pencil vs. Batman and I have returned from my two-year hiatus!

Retrieved from "https://objectshowfanonpedia.fandom.com/wiki/User:Yterbium?oldid=68000"
Community content is available under CC-BY-SA unless otherwise noted.