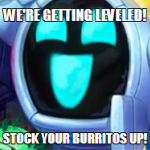 Also, call me for my acronym:

Hey guys. I'm growing out of this wiki. I might return, but not alot. I am busy with SSLW, But hey.. I'll still be active.

BTB drew this in Flower's style! And made him female.

Left: Kabloom! As flower. Middle is Steampunk Hat and right is Genie Bottle.

For the #1 TFFM Art Contest! Coal, I messed up.

Mechy, along with other objects, such as The Edge or Enchanty.

This contained some DERPY OBJECTS. Wait WHY DID I NOT USE THE ONE ON THE LOWER LEFT CORNER? Also, Ye Flask is selfish.

Even more Terrarian objects! Some are reminding me of TowMatar...

Calamity Objects. Voltaic Climax is in their but in the old version.

My New Icon is IMPROVED!!! By Nahuel!

Domino: Who are these weird people?!

HECK TSRITW DID THIS TO MY WIKI! Yeah I guess you guys want to know my secret WIKI PLACE so It's Mr. Yokai's Fantastic Slimes!

Cyber Manipulator. May be remade!

Boi I think this was one of my first objects!

Cringy Floe Picture I made. WHY DID I MAKE THIS!

Freeze Ray, my new main Terraria Object, silly Sooper dooper MLG! You know what this wiki needs more of? TERRARIA AND DIGIMON, THAT IS.

Is Octoblock a number OC...

...considering he's a reference to this? ANSWER: Nah, number OCs aren't like that!

Haters are gonna hate 'cause they don't like the specs, but the specs aren't the point at all, it's all about this guy AKA Wander over Memer who's pretty darn, ANCCCCCCCIENT. MEMER, HAHAHAHAHAAH! MEMER, HAHAHAHAHAH!

Still can't believe I racked up SIX votes in Album Wars, does everyone like bashing me for trying to show the official pose of Unwritten - Natasha Bedingfield? Anyways, I will make a LOLLIPOP Y WOODY! Aka, Lollipop hates Woody.
Add a photo to this gallery

I give credit to Saranctha.

Some other Users not Listed on Saranctha's List of Users

Retrieved from "https://objectshowfanonpedia.fandom.com/wiki/User:MrYokaiAndWatch902?oldid=433880"
Community content is available under CC-BY-SA unless otherwise noted.