USB, labeled The #1 Best Buddy, is a contestant who competed on Object Universe as one of the 3 late debuters, along with and Disco Ball. He is currently competing on Object Twoniverse.

Usb is a character who is obsessed with 'Best Buddies'. He appears to be extremely friendly and slightly insane, shown to having a slightly calmed down conflict with Window (like nearly all the new contestants) from season 1. He thinks he doesn't deserve to win, and he normally is completely selfless and only cares about others. execpt, when window announced that it's a contestants vote show, usb says that he is disliking the episode which is "Now with a B"

In Now with a B, he comes to the island, only saying he doesn't deserve to win and wants to be there for his best buddies. When it's revealed to be contestant vote, USB says to Window that he's disliking the episode. He later tries to make friends with Tetris Block, but Tetris Block says he not desperate enough to make friends, and USB says he'll force him to become friends later. 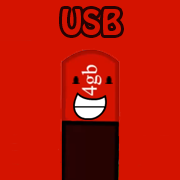 Add a photo to this gallery
Retrieved from "https://objectshowfanonpedia.fandom.com/wiki/USB?oldid=403906"
Community content is available under CC-BY-SA unless otherwise noted.