Television labeled the Television Type is a male contestant on Object Overload. He despises being called TV, as shown numerous times. He has the ability to impersonate any other character to perfection, though currently Candy has been the only one impersonated. He was also one of the four latecomers to the show.

In Set in Stone Gamey decides to open his Christmas presents, prompting Top Hat's anger he is in the bottom two when Gamey decides too open his presents. Television pop's out and lands on the ground quickly. Television indirectly earns the other latecomers a spot on the show, when he asks for clarification of the type of show Object Overload is. Televison, along with other latecomers agrees to be in the show, he is shown to be happy when he is told that he can join.

After the elimination he walks to where the other team are with Tissue, who is delighted by Lighter's recent elimination. Kite sees the newbies and asks who they are, with Gamey then introducing them.

The next time he is seen is when he interrupts Gamey and voices his question which asks which team he and the other's will be on. He (along with Locky) is assigned to Clock's team. Gamey announces that the newbies have immunity, to which Television states the obvious, in reply Gamey calls him TV, he is happy at the fact that he cannot be voted for and corrects Gamey calmly, saying that he prefers Television.

During the challenge, Television imitates Candy, that provokes her and she slaps him. He defends himself by saying that he was only joking.

When being told that his team has lost he is seen with a sad expression harnessing his face, along with the rest of his team also looking sad.

Snow-Globe and Popcorn discuss the newbies, Popcorn and Snow-Globe both agree that Television is okay, though the same can't be said for Locky.

Later he is seen at elimination and is one of the first to be declared safe due his immunity given to him last episode. He is later seen in the crowd which Crayon wants to exact revenge on as all in the crowd voted for Crayon.

Finally, he is seen cheering at his team's win.

In In Deeper Waters, Clock demands Television to crank up the motor towards the end of the episode, when Television does the motor flies off and Television comments about how bad it is before his team's boat sink.

In Lost and Found Television is referred to as the "big glowy box" by the Tiki clan many times, Kite figures out that Television and Tiki are from this part of the island when a Tiki says he prefers to be called Television as opposed to TV. A flashback is shown where Kite greets Television but calls him TV, Television snaps at her and corrects her.

He comes up the idea to steal Tikis' boat, though this fails but Clock had organized a back up plan in case it failed.

Television makes his way down the vine later in the episode, he talks to Dusty saying that they need to win, he kills Dusty because of him ascending slowly down the vine, he cheers at being at the bottom and on land, though Globe quickly squashes him. He is revived and mumbles under his breath while Dusty is seen waving at him.

One Tiki reveals to Kite that Television tried to run away but got trapped in Gamey's Christmas present box and was sent away.

Television presumably was unhappy that his team lost, though his reaction was not seen, much like most of Team Time. 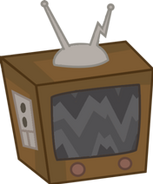 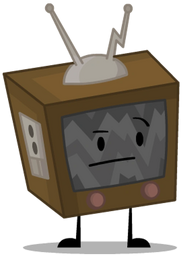 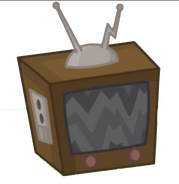 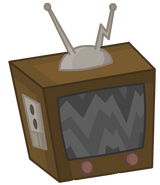 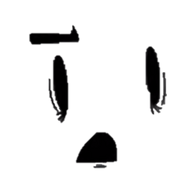 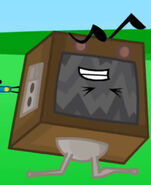 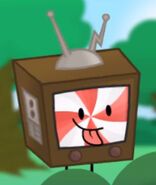 Add a photo to this gallery
Retrieved from "https://objectshowfanonpedia.fandom.com/wiki/Television?oldid=499189"
Community content is available under CC-BY-SA unless otherwise noted.