TV is a male recommended character in Inanimate Insanity who first appeared in A New Stage In The Game.

A New Stage In The Game

TV was one of the 10 fan-created characters that won the contest to have a chance at joining the game. In his audition, he has about 1008 channels and he was created by MarioLuigi3128.

In the paintgun contest, TV was hit by a paintgun causing him to explode making him the 4th eliminated in the challenge. 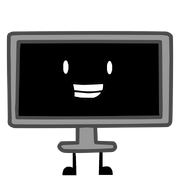 By ButterBlaziken230
Add a photo to this gallery
Retrieved from "https://objectshowfanonpedia.fandom.com/wiki/TV_(Inanimate_Insanity)?oldid=465964"
Community content is available under CC-BY-SA unless otherwise noted.