Start a Wiki
Sushi, known as The Parade, is a character of TBFS who rips off Tomberries.

It varies, as the sushi always change. For example, one is crazy, one is fearful, one is bored, one like sweets, it simply varies. But mostly, they are normal. 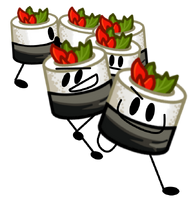 The original concept for Sushi.
Add a photo to this gallery
Retrieved from "https://objectshowfanonpedia.fandom.com/wiki/Sushi_(TBFS)?oldid=490153"
Community content is available under CC-BY-SA unless otherwise noted.