Sun is a yellow miniature version of the sun with twelve triangles around his center, his arms to do not connect to his body.

Sun is usually friendly and optimistic and likes to chip in whenever possible, sometimes at the wrong time. His bad luck often foils his attempts during challenges.

Sun said he could just fly to the finish, which led to Fire Extinguisher telling him he would automatically lose a challenge if he flew over 3 feet off the ground. Then Moon tells Sun that he is going to win the challenge and Sun is not. Sun then tells him that he is flying, and Moon flies away, regardless, putting himself up for voting.

Sun yells he needs to tries his hardest to win the challenge. He eventually makes it to the finish, but is beaten by Stop Sign for the last safe spot due to Stop Sign's stolen police hovercraft.

Sun wins the prize at the elimination with 186 likes. He wins a Teletubby sun, which he questions why he would need it. He is the second one safe at the elimination with 60 dislikes. During the challenge, Sun comments on how he likes the aprons that Bottle bought. He also is the clerk for his team's desert stand. He tells Notebook that the customer wants mint chocolate chip ice cream. His team wins the challenge, but Moon chooses him to be up for voting.

Sun comments on how the elimination area is different. Sun wins the prize again with 335 votes, and this time, his prize is danger memes. Sun is also the first one safe with 87 dislikes. In the challenge, he tells his team to come up with a song. When his team is ready to perform, Pumpkin does something to Bucket, interrupting him, giving Sun's team a score of 4/20, putting them up for elimination, yet again.

Sun is only measly shown during the elimination, saying "let's show the likes" jokingly adding on to Lock's announcement of the votes, and Lock says that is not allowed after he says it. Otherwise, he was declared safe. 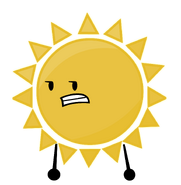 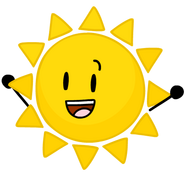 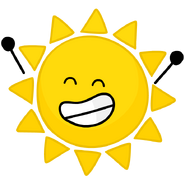 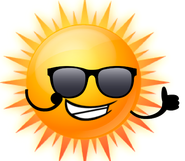 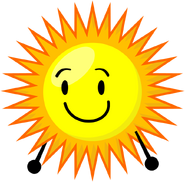 Add a photo to this gallery
Retrieved from "https://objectshowfanonpedia.fandom.com/wiki/Sun?oldid=472244"
Community content is available under CC-BY-SA unless otherwise noted.