Start a Wiki
Soap is a character from Inanimate Insanity II. She got eliminated in "Rain On Your Charade". Known as The Neat Freak, she despises germs and always clean the places/objects that had them. Soap is known for having "germophobia" (The fear of germs) and OCD.

Soap is an extreme germaphobe and wants to keep everything clean, no matter what. She is very scared when coming into contact with germs, and when knowing something is dirty, she expresses her concern of getting a disease. She carries along a small cloth with her, which she uses to scrub and wipe things, even if they are already somewhat clean. Aside from this, Soap is generally kind and willing to help her team, though she will always put cleanliness first. In later episodes, Soap became more abrasive towards her teammates and others, as shown in Theft and Battery, in which she throws Toilet out of her team's balloon, but she ends up regretting this once she is eliminated.

There is a beta version where she is a bar, as mentioned in the Secrets of Inanimate Insanity Youtube video, but was cut off the object show because AnimationEpic thought that was a misleading and borderline confusing version of a beta version of Cheesy but pink. It was like a rectangle.

Soap's real name is Sophia Goodman and likes the color pink. She hates farting, but smells or does it anyway. She was born on February 24, 2000. She also hates the word "Chapman". Soap will kill to clean germs. She was born by Kacie Chap Goodman. She is voiced by Laurel Dearing in the UK.

Soap's full name is Sarah Róża Piotrowska. She was born on December 21, 2003, in Lubin, Poland to Anzelm Piotrowska and Eliza Olexa Piotrowska and is therefore Polish. However, she spent her whole childhood in Schamburg, IL after her father got a job in Chicago at a law firm after losing his old job back in Poland. Her appearance sports a white-pink checkered blouse, pink pleated skirt, white socks, pink sneakers, and pink underwear underneath. She hates it when her clothes get dirty, and definitely hates it when someone touches her skirt.

In Minh's world Soap is only named Soap because what the heck is with all these people making real-life names for them lol anyways everyone hates Soap because she is in II.

Sophie Marie McCullough was born on Monday, April 14, 1997, at 6:24 in the morning in an unnamed hospital in Kaysville, Utah. She was born to Cassandra (maiden name: Mann), a stay-at-home mom, and George McCullough, a tailor. She has blonde hair, a white-pink tank top, a white skirt, and pink high heels.

Susie Sheep was born on October 1, 1992, at 3:33 AM in Germville, Russia. She was born by Mummy Sheep (nee Elsanusectumbjectionitoinman) and Daddy Sheep. She loves being naked. However, she sometimes wears a red wig with cheese at the center, a blue shirt, a purple skirt, black shoes, and some monkey. She goes to the Holy Fonz church every Sunday and eats pieces of bacon. She always gets up at 2:49 AM to play for Peppa Pig. As of 1996, she no longer likes the Fonz. She loves Peppa Pig. She died in 2015 because she had germiofoais. She was resurrected in 2016. She drinks every day.

Sandra Vuckovic was born on December 3, 1985, to Petar Vuckovic and Dolores Medeiros in Dallas, Texas. She has Croatian and Venezuelan heritage.

She has a severe form of OCD and also has Tourette's, she is always likes everything tidy, even the slightest bit.

Her appearance sports a White and Pink polo shirt tucked into a black skirt with white socks and ballet shoes.

She was brought up by a strict upbringing, these are a few examples

Soap is a student at Objections Academy (at least in my fanfic). She was born on March 14th, 2004 7:14 AM western time, to unknown parents that died during a bank shooting/robbery. She, of course, has OCD. She is crazy on the inside and sweet (sometimes not literally) on the outside.

Sara Bardakci was born on January 23, 1984, in Toronto, Ontario, Canada to a Turkish immigrant father and a Canadian mother of Irish and Dutch heritage.

Soap was born on February 24, 1989, in Bloemfontein, South Africa and later moved to the Sunshine Coast in Australia.

Soap was born somewhere in 1991, in Oregon and at age 22, she moved to Hollywood.

Sophia Gemayel was born on October 22, 1987 in Littleton, Colorado. 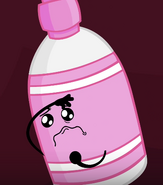 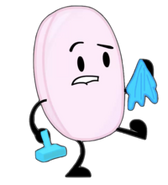 Soap in the beauty contest.

Soap in a white

Retrieved from "https://objectshowfanonpedia.fandom.com/wiki/Soap?oldid=501666"
Community content is available under CC-BY-SA unless otherwise noted.