Slime Bomb is a male OC made by BrownFamily1108.

Slime Bomb is pompous, rude and vain. He is often times seen approaching Bowling Ball, but Bowling Ball can often be annoyed by him due to his rude behavior.

While Slime Bomb is usually portrayed as a jerk, he is sometimes shown as a sympathetic antihero. 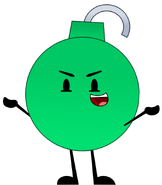 Slime Bomb and his Racing Hovercar
Add a photo to this gallery
Retrieved from "https://objectshowfanonpedia.fandom.com/wiki/Slime_Bomb?oldid=513131"
Community content is available under CC-BY-SA unless otherwise noted.