Sign Is A Male Contestant in Object Insanity. He used to be part of The Careless Carrots in Episode 2, however, he was put in The Perfect Pears to make the game fair.

Sign is an extremely rough contestant. He Is Always Mean, Kills His Members And Picks Around Magnet For no reason!

Sign is the tallest contestant on the show. He is a tall wooden board sign and used to look brighter before episode 5.

In Berserk Balancers, Sign was teasing magnet and even called Fat by Magnet. He knocked off Tangerine and fell off the Balance Beam by Tangerine.

In Objects Worth Looking For, He Was Seen Between Moneybank And Triangle. He was even chosen on Magnets team and screamed out of the tunnel when he saw the Shark Fins.

In It Goes On And On!, He was seen Being dragged By Shark Fins. He even asks Blue Highlighter If he was Highlighter. he was In the Cage With Tangerine, And Stamp. He was placed on to Stamps team by Highlighter to make it fair.

In Mountain Maniacs, He Said The Challenge better not had been Hide and seek. He even said why can't we swim instead of building. And on the boat, he got mad by punching Tangerine killing him. when Reaching the Mountain, he Won for his team. 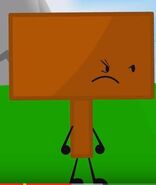 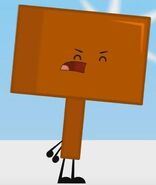 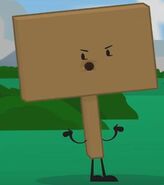 Add a photo to this gallery
Retrieved from "https://objectshowfanonpedia.fandom.com/wiki/Sign?oldid=464078"
Community content is available under CC-BY-SA unless otherwise noted.