Scythe makes his first appearance in BFOC, and was created by FANDOM Creeper. Scythe joined the game, and is still in the game, as only one episode exists (as of April 2018). Scythe likes killing people a lot.

Scythe has arms and legs, and has a stick pointing up to a curved edge at the top that is straight at the bottom. He is brown, and has lighting near the top and right of his body (not topright). Scythe only appears excited or happy after he's killed someone. He kills people a lot. Other than that, he just appeares mad, stylish, surprised or confused.

Scythe likes killing people because he thinks "murdering other contestants hightens your chance of winning a contest." Scythe also thinks that he came with a blade because that blade was meant to kill. But he's not just about killing. He is also helpful and a bit smarter than most others with his personality

Scythe has not died yet. 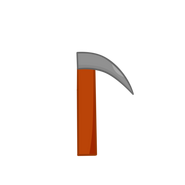 Old Scythe
Add a photo to this gallery

Retrieved from "https://objectshowfanonpedia.fandom.com/wiki/Scythe?oldid=477413"
Community content is available under CC-BY-SA unless otherwise noted.