These don't have a show to go with, they're just some characters I made. Enjoy? 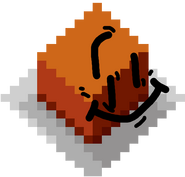 This is Spicy. Spicy is just the "Spice" sprite from Enter The Gungeon. As a living joke between me and my mates, this little guy lives on in my mind. His rather exaggerated expression shows what he actually is, a drug! That's right, he isn't just your generic kitchen spice.

This is Lockpicks, or as he prefers to be called, Locpicicks! He's literally just a lengthened "Trusty Lockpicks" sprite from Enter The Gungeon, and much like Spicy, is a joke between me and my friends. Due to the fact he only has one arm, he's known as the "One-Armed Wonder" by his friends.
Add a photo to this gallery
Retrieved from "https://objectshowfanonpedia.fandom.com/wiki/Ryan%27s_characters!_(Cha%C3%98zz)?oldid=421561"
Community content is available under CC-BY-SA unless otherwise noted.