Rock is a character created by AzUrArInG.

Rock is a wimp who tries to be cool. He always tries to impress people. He is very happy for the most part, but cries when something scary, from his point of view, happens, even though most things aren't that scary at all, and usually messes up things he tries to do. He's pretty unlucky, and does nearly everything some of his friends say. He's also quite dumb.

New Rock Pose made by AzUrArInG.

New Rock Asset made by AzUrArInG.

Rock's Old Pose made by AzUrArInG.

Rock's asset done by Pufferfishmax (Note: the shading is a lot more brighter) 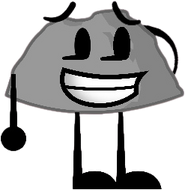 Rock seen in the original version's intro of Object Masters

Ice Ball sitting on Rock
Add a photo to this gallery
Retrieved from "https://objectshowfanonpedia.fandom.com/wiki/Rock?oldid=467485"
Community content is available under CC-BY-SA unless otherwise noted.