Roboty was one of the Battle for Dream Island RCs who didn't made it into the show. He is a contestant in Battle for BFDI and was a member of BEEP. He is our lord and saviour and even hosts his own show called Battle For The Respect Of Roboty (BFTROR).

In his audition, he said, "BFDI" in morse code. He was recommended by Clone4848, PestramiShowALT, and tyboy618.

He failed to join BFDI in Reveal Novum, with only 2 votes, the least amount of everyone and he was sent into the Locker of Losers.

He also failed to join BFDIA with 50 votes, placing him 59th, and he was sent into the Locker of Losers once again.

He had a chance to join IDFB until it was postponed.

However, he became a contestant in Battle for BFDI and was a member of Beep. He was eliminated in episode 6 with 8,254 votes, placing him 61st. 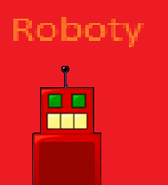 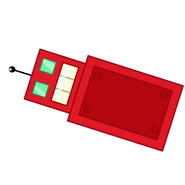 Add a photo to this gallery
Characters
Retrieved from "https://objectshowfanonpedia.fandom.com/wiki/Roboty?oldid=509213"
Community content is available under CC-BY-SA unless otherwise noted.