She is a recommended character on Battle for Dream Island that had aa nance tomorrow compeeon it, but failed. She is a robotics version of Flower, who is a contestant in the object show above. She has an autotuned voice. 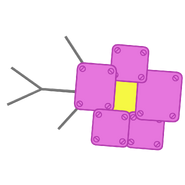 Add a photo to this gallery
Characters
Retrieved from "https://objectshowfanonpedia.fandom.com/wiki/Robot_Flower?oldid=491931"
Community content is available under CC-BY-SA unless otherwise noted.