Start a Wiki
Quince is a male character of Object Connects 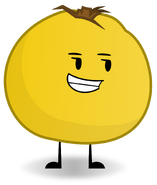 Quince is a very rich contestant. Despite living in the mansion with a total of 999,000,000 dollars in his pocket being given by his friend who died from a heart attack, Quince is known for being the most clever, peaceful, skillful, unfoolable gentleman. His goal is to make sure that his partner and everyone he alliances to was safe and whatever something wrong, he plays a judge to figure out a solution to all their problems. However, Quince seems to careless about everyone thoughts, emotions, and past times as he finds it a bit uninteresting. He is also too busy with something, ignoring other contestants suggestion and second thought. This will be difficult for him to work alongside with Cotton Candy who like him, seems to careless about everyone. Cotton Candy, unlike every valley girls stereotype, doesn't care that Quince is rich, all she wants for Qunice is to listen to her and ignore him will pay a price. Quince enjoys eating fruit salads despite being a fruit himself making him a cannibal, but he might get angry if his food tastes bad or looks wrong. And for challenge purposes, the good things for Quince is that he can solve puzzles and compete in the board game like challenges but he has to take order for Cotton Candy. However, even though Cotton Candy keeps controlling Quince, he can sometimes stand up and compete ignore her words in order to win the challenge his way but he doesn't mind to be punished by her.

Retrieved from "https://objectshowfanonpedia.fandom.com/wiki/Quince?oldid=408753"
Community content is available under CC-BY-SA unless otherwise noted.