Start a Wiki
Poison Mother Cactus, known as The Poisonous, is a character of TBFS who rips off Onion.

Poison Mother Cactus is poisonous. She's rather defensive and she usually is a nerd. She can talk non-stop, and has a burning passion to try and answer everything, interrupting oftenly. Her defensive side consists of suddenly launching towards people, poisoning them if they're near her. Despite this, she make a very bad meat shield for objects which aren't immue to poison. She's usually called a "Flying Hazard" by everyone, and she can even poison ROBOTS WHICH AREN'T IMMUE TO POISON. She hangs out with Plague Flask most of the time, and holds a grudge against Toodya because he doesn't speak clearly.

She looks kinda like a ghost, with thorns. Their is also a poison bubble floating over her, mostly aesethic. 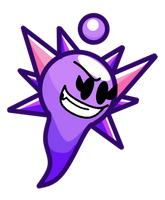 The Actual Poison Mother Cactus, gotten from Web Duowan.
Add a photo to this gallery
Retrieved from "https://objectshowfanonpedia.fandom.com/wiki/Poison_Mother_Cactus_(TBFS)?oldid=405121"
Community content is available under CC-BY-SA unless otherwise noted.