Antony/Anko6
Pinecone is a male contestant on Brawl Of The Objects. He is significantly smaller than any other contestant, being only an inch tall and he does not have arms.. However, in How It All Ended, he grew, to "flirt with the ladies". He was eliminated in episode 6.

Pinecone is so small it's hard to know if he's there. As the 2nd smallest contestant in Object Show history, Pinecone has a lot going for him. His high squeaky voice can make him almost impossible to understand, but when a microphone is near, he knows how to rap. Overall, Pinecone's size means little to his fellow competitors, as they all see him as a good friend when they're not stepping on or eating him.

Pinecone appeared in the movie as cri-kee. 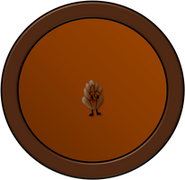 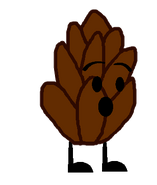 Add a photo to this gallery
Retrieved from "https://objectshowfanonpedia.fandom.com/wiki/Pinecone?oldid=620787"
Community content is available under CC-BY-SA unless otherwise noted.