Antony/Anko6
Pear is a female contestant on Brawl of the Objects. She was placed on Team Vanilla and placed 14th in the show, and the lowest in her team.

Based on her appearance, she is most likely modeled after the stereotypical pears in cartoons, known in real-life as the Bartlett pear. Pear is bell-shaped, commonly known as the typical pear shape, with a rounded bell at the bottom half, and a "shoulder" with the smaller top.

She is a typical a moody teen girl, who likes shopping, make-up and doing her so-called "hair". Because of how she's depicted, she is short-tempered, mean-spirited, usually take offense to almost everything people say, is unpleasant to everything and everyone, causing fights with others, and often insults other characters. She is also known to bully other contestants, most notably Pizza, even in the first episode.

Because of that, most fans of the show have her as one of their most hated characters, leading to her early elimination in Episode 4. This, however, didn't stop members in the OSC to frequently use her in camps and fan fictions, but with kinder personalities.

Where Pear is From 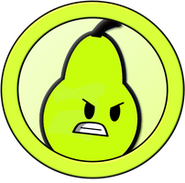 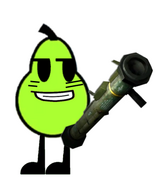 In Jacknjellify's War of the Worlds (Savage)

Pear Asset
Add a photo to this gallery
Retrieved from "https://objectshowfanonpedia.fandom.com/wiki/Pear?oldid=607000"
Community content is available under CC-BY-SA unless otherwise noted.