How It All Ended!

Party Hat is a male contestant on Brawl of the Objects and the team captain of Team Vanilla. He made his first appearance as a recommended character in an Inanimate Insanity episode, The Great Escape.

Party Hat is one of the most well-liked objects in the game. He loves to party and have fun with his fellow teammates, including his two closest friends Shieldy and Boombox. However, his inability to drive has gotten him into a few situations, but he makes up for it with his leadership qualities.

In How It All Began, he is seen sitting with Boombox reminiscing about their cameos on BFDI and II. During the first challenge, he drives a car with Pizza, Hotdog, Shieldy, and Boombox. Since he is unable to drive, he drove the car off a cliff and through the finish line. Since he was in the front, along with Pizza, he is made a team captain. When he learns he'll have to wait a month, he falls over.

In BOTO: The Videogame, Party Hat chose first, because he was in the driver's seat of the car. He chose Boombox, Shieldy, Shelly, Slurpy, Pinecone, and Pear to be on his team. He does well in the video game challenge, being the last object to lose all of his lives. Since Shieldy won, he was safe from elimination.

You can add fan-fiction about Party Hat here, but do not delete anything.

Where Party Hat is From 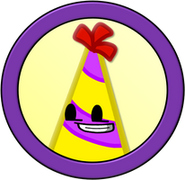 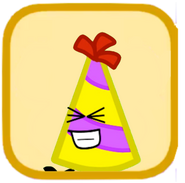 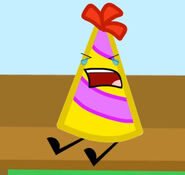 By BB230
Add a photo to this gallery
Retrieved from "https://objectshowfanonpedia.fandom.com/wiki/Party_Hat?oldid=504425"
Community content is available under CC-BY-SA unless otherwise noted.