Pan is a character created by AzUrArInG.

Pan is pretty short tempered, strict and angry that holds a very authoritarian mindset. He is shown to consistently get angry at anyone's sarcastic statements and will often be harsh on them when he believes anyone is doing the wrong thing. He also consistently brings his own views into subjects. There are times where he's shown to be very competitive and was eager to win anything.

Pan Pose made by AzUrArInG

Pan asset made by AzUrArInG 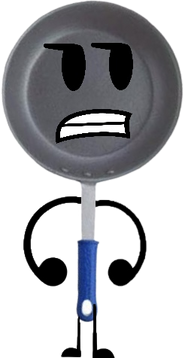 Pan seen in the original version of Object Masters.

Pixelated image of Pan made by syronjoson
Add a photo to this gallery
Retrieved from "https://objectshowfanonpedia.fandom.com/wiki/Pan_(AzUrArInG)?oldid=464657"
Community content is available under CC-BY-SA unless otherwise noted.