Paint Palette is a white palette with globs of pink, red, orange, yellow, green, teal, blue and purple paints on her.

In Object Lockdown, Paint Palette is creative all the time. She often leads the way in challenges due to her creativity and leadership skills, but due to this, she sometimes comes off as bossy to her peers. She also likes to paint, dance, and hang out with her friends, such as M&M ,Grassy, and Bottle, who are in her alliance. She is a positive character who strikes to win challenges.

In Object Lockout, Paint Palette is mostly the same as before. However, she is more kind and caring than before and truly just a great person...or is she?

Paint Palette teamed up with her good friend Grassy for the challenge. Grassy called for his taxi, and they were both picked up by Music Disc. At the end of the episode, the taxi crashed into a mountain, due to Grassy's bad driving skills.

She got angry at Grassy, leaving him. She finishes the race off-screen.

She didn't do much during the challenge. After the challenge, she talked with Notebook about how he could make new friends and become a better person.

She was on Team 3. She quickly became the leader of the team, and argued with Grassy about how he wasn't practicing the routine. In the end, Team 3 did win the challenge along with Team 4, showing that Painty's leadership worked out in the end.

During the Lockdown Session, she had voted for Umbrella, along with a few other contestants on the Safe Team. During the challenge, while having a discussion with her Allies about who else they can add into their alliance. After some thinking, she suggests adding in strong competitors, and decides to ask Bottle to join after Grassy's suggestion. While as she didn't do too much more during the challenge, she ends up thinking that Bottle & Grassy's sacrifices were brave. Soon after that, she got killed by Edgy Diamond.

During the challenge, she was placed onto the "Danger Girls" team, and was chosen to be a Builder for the challenge. After her team got some supplies from the other island, she started working on the interior, and ended up doing a majority of the work. While in the middle of working, Cherry asked her if she could help, but she was busy, and was told to help with another part of the interior. Due to her team winning the challenge, she ended up being placed back onto the safe team, along with all of the "Danger Boys"

Where Paint Palette is from 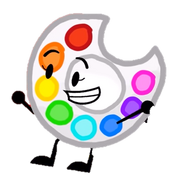 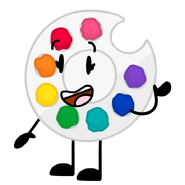 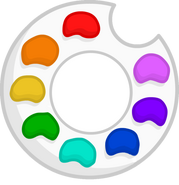 Add a photo to this gallery
Retrieved from "https://objectshowfanonpedia.fandom.com/wiki/Paint_Palette?oldid=555562"
Community content is available under CC-BY-SA unless otherwise noted.