people who are nice :)

Oshawott is an OC by Minh.

When he was born his parents are dead because they died in a war so he grew up in the street and someone nice adopted him. Since he was 8 he got bullied by other kids like Pikachu and Dewott and he is depressed so he climbed a mountain and saw a man that idk what his face looked like and he gave him a ball that will give him 98543625648568638265856673465284 times the courage he has right now (which equals 0) so he decided to go to the underworld to train to get courage so he did and when he's 17 he has98543625648568638265856673465284 courages so he bullied everyone back and has a girlfriend aka Snivy which leads to a cool ship and is secretly best friend with Braixen which he never tell people but then he became evil and replace his arms into deadly weapons that can 1-hit kill people that he hates so he did and now everyone is dead except Braixen which loses her body and turns into Braixen Head and somehow everyone is alive again and Crystal convinced him to stop being evil with her very long IQ and Oshawott is convinced now he's married to Snivy and has a family and live happily ever after SIKE now Crystal turns evil and Oshawott has to defeat her and we're left with a cliffhanger ok bye.

Battle for the best object show ever because i said so

He is very good he won all 69042 seasons and is friends with everyone and nobody hates him.

WAIT HES NOT IN CRYSTAL NEWS YOU IDIOT.

Idk he will probably debut soon because everyone like him. 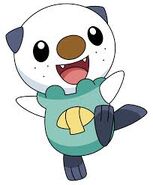 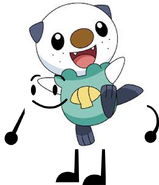 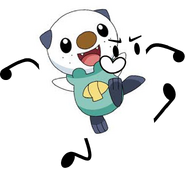 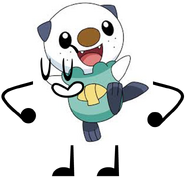 CREATOR OF OSHAWOTT
Add a photo to this gallery

Retrieved from "https://objectshowfanonpedia.fandom.com/wiki/Oshawott?oldid=494674"
Community content is available under CC-BY-SA unless otherwise noted.