Orange Ball is an OC created by AzUrArInG.

Orange Ball was originally created when AzUrArInG saw videos of people recommending characters onto their object show, and he found this one which only allowed limbless OCs.

However, AzUrArInG did not have any OC which was limbless, so he rushed up and came up with Orange Ball who is nice and cool and recommended it to the person recommending limbless OCs.

Then, AzUrArInG decided to use Orange Ball for newer shorts and used him for the original version of Object Masters, and thought of giving him a GF known as Purple Ball who has both arms and legs unlike Orange Ball.

After that, the original version of Object Masters was cancelled, so then, AzUrArInG made an image of Orange Ball and Purple Ball kissing each other, so he tried to look up that on google to see if it popped up.

However, when he looked it up, he instead encountered images of Another Orange Ball that was much more popular than his and found out it was made by Nadiya2000.

Due to this, he believed people would think that his Orange Ball is trying to "rip-off" Nadiya's.

So, he tried to tell everyone that he wasn't trying to rip-off Nadiya's and was only made for a recommendation video.

However, since he was pretty unpopular at the time, no one even saw it nor listened, so he originally decided to remove Orange Ball from the reboot and as well as Purple Ball.

But, he decided to keep Orange Ball and Purple Ball into the show and thought the characters were "unique".

Orange Ball is pretty friendly and an easygoing person, to the point where he can sometimes embarrass some of his friends or even his girlfriend.

He's also optimistic as he tends to look at the positive sides of things that could be precised as negative by other people. Although, he's not afraid to stand up to people who are picking on him, his friends, or his girlfriend.

However, despite his pretty friendly and easygoing personality, he can sometimes act a bit rude whenever someone tries to flirt with his own girlfriend, most notably Booger. 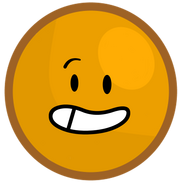 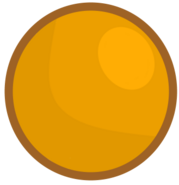 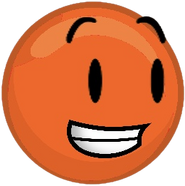 Orange Ball seen in the original version of Object Masters.

Orange Ball confused
Add a photo to this gallery
Retrieved from "https://objectshowfanonpedia.fandom.com/wiki/Orange_Ball_(AzUrArInG)?oldid=467491"
Community content is available under CC-BY-SA unless otherwise noted.