Bakkwa: I have few votes last episode today, I hope I'm not eliminated!

Four 2.0 closed Comment's mouth and screech at him.

Crab Arm: At least I have n-

Ginger Breadman: I have no votes.

Four 2.0: Satanser, you'll lost last episode, that's means one of you will be eliminated.

Chopsticks: C'mon! Show us the votes.

Chopsticks and Finn Hat gets launched.

Four 2.0: Anyways, everyone had 0 votes except for Comment and Bakkwa.

Bakkwa: *sigh* I was trying to help my team.. But I should blame my bakkwas for eating it alot everyday.. Yes.. I don't want to share but I'm only hungry for bakkwas, but if you want to eliminate me.. Do it

A person in a portal is coming in.

X 2.0: That's right, and the challenge is to against me. If you're team not enough people after being defeat by me, you loses.

Blackboard: Oh, it's my turn!

X 2.0 shoots Blackboard and he dies.

Four 2.0: Look like Satan Is Against You lost again!

Four 2.0: Vote to one who will get eliminated, the person with the most votes will be eliminated. 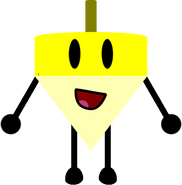 Clone Jucy
Add a photo to this gallery

Recommending ends after the episode was released.

Retrieved from "https://objectshowfanonpedia.fandom.com/wiki/Object_For_The_Prize!/Great_Man_Dies?oldid=347192"
Community content is available under CC-BY-SA unless otherwise noted.