Object Shows Community
Register
Don't have an account?
Sign In
Advertisement
in: Camp, Camps that inspired by BFCK, SuperCDLand's Camps,
and 32 more

Object Crossovers is an Object Show/Camp hybrid that was created by EpicCDLand2 (Also Known As PlanetBucket22 On Youtube And DeviantArt). In this hybrid, 79 (originally 65) contestants from every object show (contestants or recommended) will compete for the chance to be crowned, "king (or queen) of object crossovers. As the show went on, 9 more were added in the game, making the total of 88. the host of this camp was Chicken Nugget. as the video process, co-hosts will add to the camp. this includes Bucket, TV, Ribbon, and Dahlia. The first four videos were just a standard 4:3 screen, but in later videos feature in the 16:9 widescreen.

On August 12, 2017, PlanetBucket22 (EpicCDLand2) announces that Object Crossovers! will be end on October 29, 2017 (the same day where this camp first released) and season 1 will be the only season, confirming that there's never going to be season 2.

On October 26, 2017 (three days before it introduced), Object Crossovers! has been concluded, and they won't be a second season. KirbyRider1337 (Phone) would go on to win the camp, with pokpower8 (Cookie) taking home 2nd and 24AMPER (Joypad) placing 3rd. 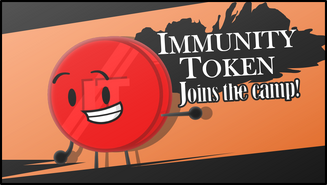 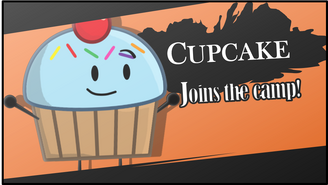 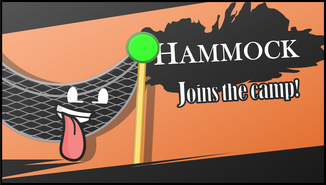 It started out when Chicken Nugget introduced to the viewers to his own camp called, "Object Crossovers." He later asked that the reason what ever happen to Battle for Cake Kingdom to the viewers? He replied that Battle for Cake Kingdom was going on a hiatus for a while so no one is going to wait for months for a new episode. That's where Object Crossovers was created? Chicken Nuggets said that Object Crossovers is going to be the same thing as Battle for Cake Kingdom, but different. Instead of OCs, 78 contestants from different object shows will compete for the chance of becoming "King (or Queen) of Object Crossovers." Then it later cuts to the contestants in the camp, Headband was really confused about this place. Surrounded by people she didn't know them from her show, "Apex." She also mentioned that a stranger (which is later turned out Chicken Nugget) who also don't know invited her in his building. Yellow Face from Battle for Dream Island Again (being the only one who doesn't care where this place is) decided to be the nice one and said hi to everyone that he didn't know from his show. Crayon from Object Overload mistake Fanny as Melony about Yellow Face is so annoying. Fanny confused and talked to Tree that did she called him, "Melony." She later realized that Fanny and Tree she talked. Crayon glad that Melony didn't appear in Object Crossovers because she hated Crayon for being a mean and bossy to her. Snowglobe later appeared and still hated Crayon. He said that Melony desired to be in this camp more than Crayon by being crucial and a smelly head (Dusty's later calls Crayon that) to her. Crayon rejected it and said that she going to win no matter what. Fanny jumps to this scenes and still confused that she called him Melony. Chicken Nugget later appeared and introduced to everyone. However Toast from Object Mayhem jumped and said to Chicken Nugget that he looked so delicious and tried to eat him, but Chicken Nugget gave her an Ice Cream and stopped her from eating him. Gelatin from Battle for Dream Island Again later respond to Chicken Nugget that why did he invite everyone in this place? Chicken Nugget replied that his name is Chicken Nugget and he welcomes them to his camp, Object Crossovers. Disc from Object Overload breaks the fourth wall by looking at the logo and explain that. The first challenge is a competition between a team name, a quiz, and the race first challenge. If three of the contestants who completing for the challenge first, gets to be the team captains.

People Who Did The Challenge:

27. Cleaver (AA):moneymansionbattle (The Objects With SWATBO (Secretly, We Are The Boss Objects))

As it turns out, Ornament, Ruby, and Coiny are the team captains because they're the first ones to do the challenge. However, the name would go to be changed. Ornament's name "The Ornaments of Joy" became known as "The Joyful Ornaments." Ruby's name "Team Freesmart" also changed and became known as "The Golden FreeSmart." Coiny is the only one to not change the team name, instead, he retain it as "The Rusty Pennies." All of the 75 contestants are up for Object Crossovers's first elimination, so it's up to the team captains to each choose which 25 contestants to stayed and moved to the team while the other 3 to be eliminated.

Before the first elimination started, it cuts to Dusty (who's now mixed with Crayon in the last video) asked Beaker to change them back to normal. Beaker accepted and gave him an antidote. Once he drinks it, it turns back to normal.

At the elimination area, everyone was staying there waiting for Chicken Nugget. Reason because he was volunteered to find the golden token in the last video. If he doesn't do it, then the show will be canceled. Chicken Nugget accepted and moved out. After the confessionals, Chicken Nugget returns, now in purple to camouflage himself from predators. Chicken Nugget didn't found the golden token. But he found something. At it turns out that there're 79 contestants in the game instead of 78. Meaning 1 joined the game without a user. Some of the contestants tried to accuse others. But Chicken Nugget denied this and stated that everyone, included the ones who got accused, all got users. Instead of finding which one, Chicken Nugget wanted to do this later and started the elimination. The team captains, Ornament, Coiny, and Ruby will each get to choose which 25 to be on their respected teams.

Doodle was the one who joined the game without a user.

After Cheesy, Slurpy, Fanny, and Doodle are being sent to The Blue/Loser Dimension, it's time for the challenge which is Death Trap. Locky was shock about Death Trap, but she has no idea what it is causing Chicken Nugget to go confuses. Chicken Nugget later explains. The challenge was to go to one of the six rooms in each three rounds without being enter to the Death Trap. Because if they are in the death trap, they will be out of the challenge. One of these rooms, contain one of the characters instead of the TV which later turns out to be Nickel from Inanimate Insanity. And the other room, the purple room, ounces entering, it can turn everyone (except for Beaker) into purple which will explain why Chicken Nugget was purple earlier.

People Who Did The Challenge:

After all three rounds, The Joyful Oranments won the challenge, putting The Golden FreeSmart up for elimination. However, is ain't over yet. Someone from the winner team will be the first one to leave the building to find The Golden Token. And that person happens to be Easter Egg.

After confessionals, Match, Ruby, Disc, Tennis Ball, Lego, Snow Globe, and OJ got immunity from the last challenge, so they just sit down on the immunity bench. Ruby takes a blame herself for her team lost, but Match cheers her up and said to her that at least she isn't up for elimination. Plus she also said that Leafy is going to be eliminated for good. OJ asks Match about that. Match responds. Anyway back on the elimination, both Chicken Nugget and TV got distract to The Square Tokens (prototype of The Contestant Tokens), but Burrito interrupts them and tell them to stop playing with these tokens and continue the elimination already.

Cause of elimination: Rocky was eliminated because of his past life in BFDI.

After Rocky's eliminated, Eraser asked Pen about Leafy's elimination, but Disc interrupted and responded to him that Leafy isn't eliminated, Rocky is. This caused Bracelety to be glad that Rocky's out this was because Bracelety was jealous. She explained to everyone that how did the viewers voted for Rocky to join Season 2 despite not doing any challenges from BFDI and BFDI(A)!

After that, Chicken Nugget appeared and revealed the next challenge. Then later jump cut to the entrance of a bizarre place called, The Fun House". So bizarre that it even makes the contestants both confused and surprised. Chicken Nugget later appeared again this time in the magician costume instead of the ringmaster costume

These are all the tokens, remastered by your's truly. You can use them on your camps, make sure you credit to me.

Meet the most common token in the entire Object Community, The Win Token. What does it do? When you use it, it slices HALF of your votes

This is The Win Token's big brother, The Immunity Token. This token was first introduced in Guylan's camp, Battle For Space Palace. When you used it, it takes away ALL of your votes.

This token is blue for some reason. Anyway, this is The Win Token's other brother, The Revenge Token. Also introduce in Guylan's camp, Battle For Space Palace. Like The Win Token, it slices half of your votes. But those votes are given to the nominee of your choice. Increasing the chances of the nominee to be eliminated! This token will be only given to The rejoinders.

Angel Token, also known as The Alliance Token. Like Immunity Token, it removes ALL of your votes. But subtract all of your votes to the nominee of your choice. Decreasing the chance of your alliance member to be eliminated.

This is The No Token, a rare token. I'm not joking. This is literally the name of this token. It designs to cancel all of your nominees' tokens used for one elimination. However, it will not effect to the nominees' who used their tokens outside the elimination.

This is The Swap Token, another rare token. As the name suggest, you can swap your votes to the nominee of your choices votes.

This is The Keep Token.Do you want to keep your tokens on your hands? This token got your back. When using it, alongside with another token, you get to keep that other token. This token will be given to the newbies, which are debuters.

The First Token. A very rare token. The contestant who placed first will be also up for elimination.

The rarest of all the tokens,The Golden Token. It makes you takes control for one elimination only. You get a prizes and immunity from the elimination.

This is the new token, The Tri Token. Like The Win Token, it takes away half of your votes, but that votes will be multiply be three and will be transfer to your current scores.