Mashup of many objects

OO Tri is an OC by Insanipedia based off of The Tri.

Unlike the Tri (which are just characters made into a 3-headed thingie to have revenge over things), OO Tri don't even care about revenge.

It's two arms are Crayon and Boombox and it's legs are Marble, Toothy, Pumpkin, and Lighter.

It's torso is Gamey. 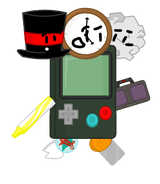 Alternate pose
Add a photo to this gallery
Retrieved from "https://objectshowfanonpedia.fandom.com/wiki/OO_Tri?oldid=388439"
Community content is available under CC-BY-SA unless otherwise noted.