Naily is a contestant from Battle for Space Palace. She is also one of the 30 recommended characters who had a chance at joining the game.

In Reveal Novum, Naily and the other 30 recommended characters had a chance at joining BFDI. However, Naily, along with (Barf Bag, Saw, and Tree) only got 3 votes each and they were flung into the Locker of Losers.

Yeah, Who? I Wanna Know

In Yeah, Who? I Wanna Know, Naily also had a chance at joining, but she only got 100 votes, placing her 38th, and she was flung into the Locker of Losers once again.

In Welcome Back, Naily had a redesign that features a larger font, a lighter shade of gray, and the needle is smaller. Naily had a chance to rejoin as of Welcome Back until IDFB is postponed and it was replaced by Battle for BFDI.

In Getting Teardrop to Talk, Naily first appears when Pencil was asking if she popped Bubble. Naily responded "No!" and Pencil tried to punish Naily, but Loser told her to put Naily down. Pencil started to apologize to Naily. Naily joins Team Ice Cube! along with the other members that are in that team. During the challenge, Naily helps with Spongy, Bracelety, and Barf Bag bringing the basket to X making them safe.

In "Today's Very Special Episode", Naily is seen after the intro, climbing Bell's string, along with the rest of Team Ice Cube! (barring Donut). At Cake at Stake, Naily is declared safe with 1,178 votes. When hit with a cake, she is knocked off of Bell's string, landing on Woody. Because of this, she avoids Lightning's electrocution of the climbers. She agrees with Clock that it was the largest zaptation she's ever seen. She does not actively participate in the challenge, but her team is safe.

In "Fortunate Ben", she doesn't speak, but despite that, she appears alongside teammates Spongy, Donut and Barf Bag, and corners Gelatin, who threw Bracelety's signs into a dumpster and were recycled into Death P.A.C.T.'s fortunes for the Cake at Stake. She is seen happy, however. She is later seen on her team's paper plane, and their plane never hit the ground, granting immunity.

In "The Liar Ball You Don't Want", Naily is first seen yelling "My turn!" and bouncing through two rows of bouncy toys along with everyone playing with the toys. When Donut announces what he did to Loser to eliminate him, she states that he had it coming. Firey Jr. tells her off for being "ungrateful". During the challenge, when the contestants are fighting over the jawbreaker, Naily stabs Bell in the face (who had the jawbreaker), killing her, and escorts the jawbreaker while still inside of Bell's body. She tells her team (referred to as "icy boys") not to worry, and that she's got it. Later on, it shows that Naily has been stabbed by Needle.

Naily is dead for the next few episodes but is revived in "Enter the Exit" by once Four is brought back by Pin. Prior to Four's resurrection, Donut had attempted to revive Naily, but had only succeeded in creating a mutilated version of her identical to the form contestants take on after being magically mutilated by Four. Upon being revived, Naily returns to her team and is hugged by Bomby.

In "What Do You Think of Roleplay?", Naily stabs Spongy, and this angers Firey Jr. He asks her if stabbing people is the only thing she knows how to do, and she replies that her being a nail makes everything look like something you should stab. Barf Bag later asks if Naily is a fake due to her not making any nail puns, but she explains that she's stopped because Firey Jr. found it annoying. She then asks if Spongy is a fake due to him just sitting there the whole time, but the other see this as normal. This makes her and Firey Jr. think that Bomby is the impostor, but before they can finalize their decision, iance figures out their impostor, meaning Team Ice Cube! is last and are up for elimination. She seems to be annoyed at the "melting" joke Four used when he says they were up for elimination and even more annoyed when X and Four argue about it. Naily and Firey Jr. blame each other for losing the challenge.

In "Return of the Rocket Ship", Naily states that she never expected the outcome when she was announced to be the last one safe during Cake at Stake with 5202 votes. She then proceeds to say "Good riddance, am I right?" after Firey Jr. was sucked into Four.

During the challenge, Naily is seen digging with the rest of Team Ice Cube! where they find a mysterious location.

In "Don't Dig Straight Down" Naily and the rest of Team Ice Cube are in an Inverted Planet (or Underground Forest as said by Donut) where she and Gelatin are chasing each other and Naily breaks Barf Bag, who starts to feel whoozy. when the Hot Spring explodes in a shower of lava the entire team runs up Spongy to escape, who Donut saves. Naily, Gelatin and Barf Bag jump on Bomby to escape to the surface. Gelatin pushes Naily off because there wasnt enough space and Naily falls into Beeps hole (which Balloony remarks with "how did Naily get into our hole, that makes no sense") and tells them that they'll nail it. when Beep realises that Lava is coming then they go back down, with Naily now on Cloudy. Then Balloony remembers about the acid floor and they go back up, then down, repeat about 50 times. when Nickel is chomped by Rocky to barf more acid they are saved, and then Balloony uses Naily as a weapon to get through the metal they landed on and get through (Cloudy, Rocky and Balloony die) Naily and Woody run across Golf Balls secret underground factory floor Naily tells Woody that they're sorry for stabbing them 10 years ago, which Woody presumably forgives them for. when they meet up with Cake and Coiny they have to get into the garbage chute to live, Coiny breaks the sealed entrance to fall in Lava and Naily and Cake toss Woody over so he can live as they are too small to get in.

In "The Four is Lava" Naily spits a puddle of lava (a recommended character) out as the Lava wasn't hot enough to kill her or Coiny. soon after we can see Coiny and Naily running behind Flower who says "What? I can't let them beat me!" Coiny says it isn't a race when Flowers says thats the whole point of the challenge, when Coiny kicks Naily with his newfound knowledge. Needle gets Coiny and The Losers are safe. Flower stabs Naily into the ground, who says "awww" and "I screwed up, and i'm not even a screw" so Team Ice Cube loses.

Mechanic: Naily will randomly drop into the office with no warning. When she does, her shank will break the desk upon landing. Quickly click on her to fix the desk and get rid of her. If you don’t click on her in time, you will get jumpscared. 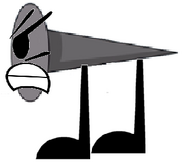 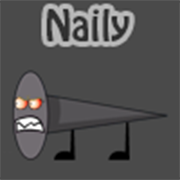 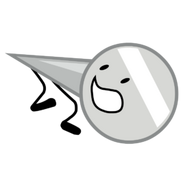 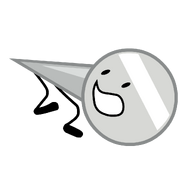 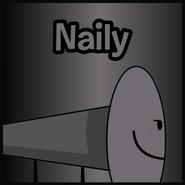 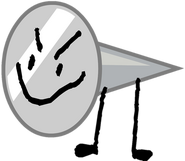 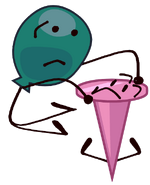 Characters
Retrieved from "https://objectshowfanonpedia.fandom.com/wiki/Naily?oldid=513817"
Community content is available under CC-BY-SA unless otherwise noted.