Nail is a female contestant in Object Havoc.

Where Nail is from

Similar to Wheel, Nail is a grumpy and pessimistic character, and she generally complains if she doesn't like something or notices what could potentially go wrong. She and Carrot appear to be best friends, as the latter always comes for her in time of need and they pair up in Binders Keepers.

In Platform Pandemonium, Nail was knocked into the ground by Hammer, but Carrot then came by and helped her out, although she bumped into Volleyball and Bucket through this process. During the challenge, she complained about Lighter knocking other contestants off, although he argued that they were allowed to do so. She then punched him off in a fit of anger. Although she is never seen falling off during the challenge (like Mirror), she lost and was not chosen as team captain. 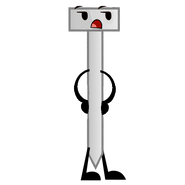 Add a photo to this gallery
Retrieved from "https://objectshowfanonpedia.fandom.com/wiki/Nail_(Object_Havoc)?oldid=438433"
Community content is available under CC-BY-SA unless otherwise noted.