Moneybags, known as The Deranged, is a character on The Fight for Magic.

Moneybags is a very strange competitor on the show. Despite his lack of limbs, he is very expressive and can have mood swings. When he get's angry, he goes ballistic. For instance, one time he ate Axe because he made a joke about him having no brain, and another time, he started spewing out massive coins at other contestants.

Moneybags is a generic sack of money from a cartoon, with a red string tying him up. A green dollar sign appears on his forehead.

Moneybags was eliminated second in BTWTUP, however he rejoined, only to be eliminated the next episode. Muneybagz wun da show becaus hez better then evryone especiully that meanie battle reviewz and erned his well-deservd prize that I can't rember. 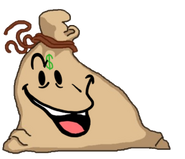 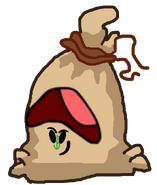 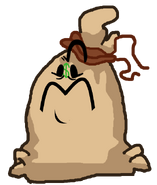 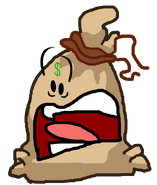 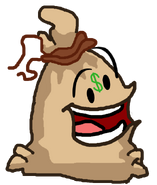 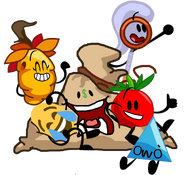 Moneybags beating Fridgey up.
Add a photo to this gallery
Retrieved from "https://objectshowfanonpedia.fandom.com/wiki/Moneybags_(TFFM)?oldid=451133"
Community content is available under CC-BY-SA unless otherwise noted.