Start a Wiki
Mirrory, known as The Fragile, is a character on The Fight for Magic.

Mirrory is a very angry character, threatening to kill multiple people. However, because of her lack of a mouth, she can't get her words across to people a lot, so a lot of people don't understand her violent tendencies. She is also abused because of her fragile glass body, being smashed multiple times. This is usually done on accident, however it is sometimes done on purpose, and she has never had the chance to get revenge. She's very good at keeping secrets, since she can't talk.

Mirrory is a plain mirror. The outer rim of her is not protected by a wooden frame. She has eyes on the very top of her body and does not have a mouth or arms, but she does have legs. 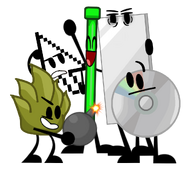 Seaweed, Cursor, Glowstick, Mirrory and CD-Y
Add a photo to this gallery
Retrieved from "https://objectshowfanonpedia.fandom.com/wiki/Mirrory_(TFFM)?oldid=512396"
Community content is available under CC-BY-SA unless otherwise noted.