Mirror is a female contestant in Object Mayhem. She was placed on Team Lucky/Gun. She was eliminated in Find it!, but she rejoined the game in Dice and the Candy Emporium.

Mirror is shown to be kind and caring.

Mirror has a light brown frame which supports, of course, the shiny mirror in the middle. In space her glass mirror appears in a dark blue color, although when on earth it has a light blue shading. 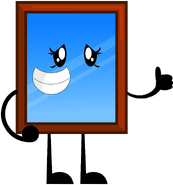 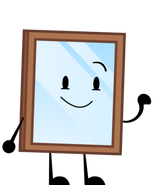 mirror in season 2.
Add a photo to this gallery
Retrieved from "https://objectshowfanonpedia.fandom.com/wiki/Mirror?oldid=541875"
Community content is available under CC-BY-SA unless otherwise noted.