For other uses, see Microphone (disambiguation).

"But guys, I thought we were FRIENDS!" -Microphone before being eliminated in CTW 7

Microphone is a contestant that was chosen 2nd on the awesome team. She is a bit bossy, but mostly helpful to her team.

Apparences on Mountain of Sadness

Microphone sang a song how they will win, but they lost beacuse she along with Asteroid and Fat Alien didn't climb the mountain.

Apparences on Cooking and Eating

In episode 3, she got 0 likes, and 1 dislike. She also ate Umbrella and she got a cake from Fat Alien.

Microphone was leader in episode 4. She assigned melon and fat alien to do the outside of the house, and asteroid and yellow spider to do the inside.

Microphone was eliminated with 7 dislikes, Banana, Camera, Rainbow, Asteroid, Party Hat, Umbrella, and Yellow Spider Voted for her to be eliminated.

The Episode starts off with Microphone and the rest of the eliminated contestants betting on who will rejoin. Banana says that she probably wont rejoin because she was eliminated last episode. At elimination she only got 7 votes to rejoin, tied with Star for the lowest amount of rejoining votes.

Where Microphone (Challenge to Win) is from 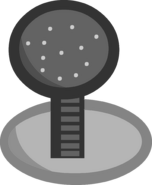 Add a photo to this gallery
Retrieved from "https://objectshowfanonpedia.fandom.com/wiki/Microphone_(Challenge_to_Win)?oldid=433633"
Community content is available under CC-BY-SA unless otherwise noted.