Start a Wiki
Mario & Luigi Hats, labeled The Delectable Duo, are contestants that are currently competing on Object Twoniverse. They are the two hats of the two Italian plumbers from the Mario series, and while they need each other but Mario Hat thinks he is better than Luigi Hat, showing his arrogance.

Mario Hat, labeled The Power, is shown to be a competitive and strong character, contrasting with his brother. Although being quite rude and insulting to Luigi Hat, he also appears to be quite caring, as when Luigi Hat seems sad he says "Spaghetti?" in a suggestive and curious manner. He was Eliminated in Inanimate Overload

Luigi Hat, labeled The Glory, is a lot more nervous and is always shadowed by his brother Mario Hat. He made one of the first references of the series when he said "I hope she made lots of spaghetti!" which is a constantly used Mario Brothers riff as of the weird audio (although it doesn't make sense with the previous lines of the episode). He has grown rather passively needy, and thinks he doesn't get enough attention, which may be true. 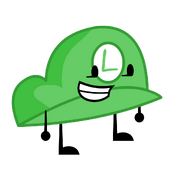 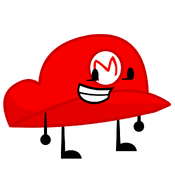 Mario and Luigi Hats fighting in the intro. 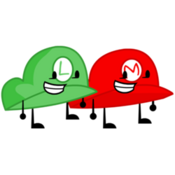 Both of them together.

Luigi Cap'' In OaK
Add a photo to this gallery

Retrieved from "https://objectshowfanonpedia.fandom.com/wiki/Mario_%26_Luigi_Hats?oldid=464348"
Community content is available under CC-BY-SA unless otherwise noted.