Magenta Top Hat Is An Average Top Hat Clone Made By JoeJoeTheAnimator.

She is a very shy contestant and doesn't get along with much people well, and gets scared from the simplest things sometimes. She gets bullied by Dark Yellow Top Hat sometimes due to her shyness, and because of that she dislikes Dark Yellow Top Hat greatly. Her best friend is Cyan Top Hat, because they have been the nicest to her thus far on the show. Because of her shyness though, she doesn't talk to much competitors on the show, and that makes her very unpopular and somewhat disliked to some contestants. 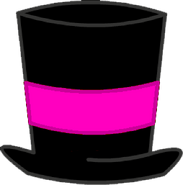 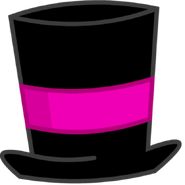 Her Body
Add a photo to this gallery
Retrieved from "https://objectshowfanonpedia.fandom.com/wiki/Magenta_Top_Hat?oldid=292520"
Community content is available under CC-BY-SA unless otherwise noted.