M&M is a contestant on Object Lockdown.

M&M is a green M&M wearing an orange beanie with a picture of a froggo with a yellow background and a black outline, and a golden coin with a dollar symbol held onto a necklace made of golden rings.

M&M is an entertainer. He strives to be a famous rapper one day, and due to this obsession he records a lot of songs to play for others. He is rebellious, and often doesn’t like to follow the rules, hence his hatred for Stop Sign. His friendship with Bucket is very one-sided, as Bucket often finds him annoying. He also isn’t very smart, and does a lot of stupid things for attention, and to get his best friends, Grassy and Paint Palette to laugh.

He began to talk to Bucket about his rapping. M&M asked him if he knew who he was, and Bucket reluctantly replied yes. (He lied.) He became ecstatic and immediately became friends.

M&M started to get on Bucket's nerves. He played his "hit single" to Bucket, and he got annoyed at the song. M&M made it to the finish line off screen.

M&M wasn't seen much during the challenge. Before the challenge though, he argued with Grassy about pointless, funny things for attention.

He was placed on Team 3. He wanted to perform his new song 'It's Like Spaghetti' in front of the audience for their teams' performance. Stop Sign did not want to do it, but everyone else liked the idea so they rolled with it. During the performance, Parobject jumped off of his head and sung alongside M&M. Parobject is M&M's friend, and can jump off at any time in order to help sing and other things. However, he is not a contestant .Their team ultimately got a 18/20 due to M&M (and Parobject's) singing.

He was walking with Paint Palette and Grassy in the forest. He accepted Bottle into the alliance. He started to rap beside Paint Palette. She said the rap did not make sense. M&M ended up being one of the eight survivors, placing him onto the safe team yet again.

When choosing groups, he was placed into a group with Umbrella, Bucket, and Can. He unintentionally annoyed Can throughout the course of walking to locations they went to. After everyone in their group started walking to Cone E. Island, Can stated that went they got there, that he wanted to drown him. He tried to rap but Umbrella broke the radio. M&M was very disappointed.

During the challenge, he was chosen to be one of the team's builders. When their team discussed what type of house they'd build, M&M had suggested building a Sand Castle, and the team decided to go along with it. (likely due to it being easy to build) Later on, when Stop Sign ended up destroying the castle, M&M got upset about it, practically sealing their inevitable loss. Due to losing the challenge, M&M got placed onto the danger team for the first time.

Where M&M Is From 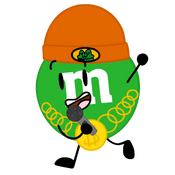 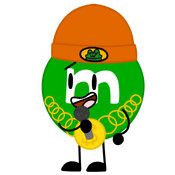 Add a photo to this gallery
Retrieved from "https://objectshowfanonpedia.fandom.com/wiki/M%26M_(Object_Lockdown)?oldid=505628"
Community content is available under CC-BY-SA unless otherwise noted.