Lemony is a male contestant on The Medal Brawl. He was placed on Clip Team.

In ¡Hole in one!, Lemony wants to tell YFone a joke, however, he got killed by the machine that squished him. Bag was upset when the machine killed Lemony. Battery has a jar and tried to revive him. But to revive him, YFone said that there is no machine yet and it will arrive in 2 months. The challenge is to play golf, Lemony didn't participate because he was dead. His team wins because of Battery.

In ¡Oasis!, Lemony was revived by the machine. Lemony told Battery that since he is alive, he shouldn't have another Lemony. In the challenge, Lemony used a marker to draw on Bullet while he is sleeping. When Bullet looked in the mirror, he was angry that someone drew on him which was Lemony. Bullet broke the door and chased Lemony in the train, then out of the train. Lemony climbed the ladder on the back of the train and gotten to the roof of the train. Lemony ran on the roofs of the train and jumped. When Lemony was at the edge of the train, Bullet tried to get Lemony, but Lemony dodged it and Bullet falled into the ground with railway tracks. His team loses and he was up for elimination.

In ¡Pirate Treasure!, Lemony recieved 2 votes and he was safe. Lemony then told Bag to know if he was here, then where is YFone, if he's on another boat. Soapy chose Lemony to pick the gold on the boat. Clip Team helped the challenge while Lemony was waiting for the gold. Soapy places the gold into the bucket. Lemony throws the gold off of the boat and his team wins after deciding what team wins the challenge. Lemony called Bullet's team losers and then, Bullet killed Lemony with a knife. Basketball, Bag, Pillow, and Battery were scared when Bullet killed Lemony and Battery was upset when Lemony died once again. And the machine will regenerate next episode. 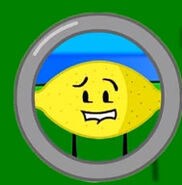 Add a photo to this gallery
Retrieved from "https://objectshowfanonpedia.fandom.com/wiki/Lemony_(TMB)?oldid=316493"
Community content is available under CC-BY-SA unless otherwise noted.