Leek is a female contestant in BFTPITS. She was taken by Lepus the Second.

Leek is the most athletic character (even more athletic than Basil and Blender). She is always shown to do small stunts like cartwheels and much more. This is because she needs tons of energy to be healthy so she makes them all the time. She prefers to do body-based sports like running and doing acrobatics instead of doing other sports like go-karting and boxing. She is super cool with everyone and doesn't seem to dislike anyone (even with those that dislikes her like Basil and Conch Shell). She is also shown to be smug with others sometimes. She loves to give healthy habits to others even if they don't really want to. Leek is possibly the most competent of all of the three athletic characters and she mostly knows what she is talking about when talking about sports. Otherwise she is very bad at almost every other types of challenges since she is not the smartest, she is not the most careful with care-based challenges and does thinks to quickly without thinking first. She loves the pranks of Milkshake and is best friend with Blender and Basil (even if Basil doesn't like her because he thinks that she treats him like most contestants treats him). Leek is so energetic that she will never fell-asleep at any times, anywhere. 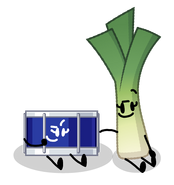