Leaf, labeled The Common Type, is a contestant on "Object Oppose"; and was a member of Team Motor Tires.

Leaf is a kind and fun person. He likes volunteering or helping out along with getting noticed. It was revealed that Leaf isn't the best at drawing in "Keep On Coloring", yet in "Speedy or Sporty", Leaf made a 3-dimensional model of the "Melody Star" Logo which shows that he improved on his artistic ability. 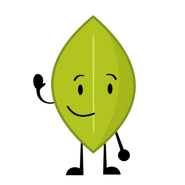 Add a photo to this gallery
Retrieved from "https://objectshowfanonpedia.fandom.com/wiki/Leaf_(Object_Oppose)?oldid=444790"
Community content is available under CC-BY-SA unless otherwise noted.