Toaster (Best Friend), Everyone (Except Enemies)

Kite is a female contestant on Object Overload and its reboot.

She is one of the nicest objects around, and is willing to help anybody. Her best friend is Toaster, who she constantly has to care for.

Kite is trying to help Toaster fix him again, ignoring Candy, who wanted to show Kite her new stripes. Then, Toaster spat out his toast at Kite. He did it so quickly that Kite did not notice quick enough to dodge the flying toast that hit her eye, making her partly blind and bumping into Tissue. In the challenge, Ping-Pong Ball asked Kite if she can help him up the podium. After she agreed, she kicked him on the podium. Later in the challenge, Toaster was broken again. Kite asked him if he is okay, but then she is hit by a flying dodge ball making her fall. The dodge ball that hit her ricocheted into Toaster, making him fall off the podium too. At the end, Kite was at the hospital telling the lady at the front that she has a broken arm (caused by hitting the ground too hard.) and her eye kind of hurts. (caused by Toaster who shot toast into her eye.) The lady tells Kite to join the line of the recommended characters.

Kite was chosen by Boombox, as well as Boxing Glove, Soccer Ball, Toaster, Masky, Disc, Marble, Pearly, Toothy, Coney, Paper Airplane, and Ping-Pong Ball were chosen to be on Team Tune. The challenge was to guide your partner through an electrical maze. After Gamey said the rules a few times, Lighter interrupted him to say what happens when you touch the electric fence, then kicks Kite into the maze, touching the fence, and got electrocuted to death. She was then recovered by the doorway of life Clock built. Kite got paired up with Toaster. She said to him that he will be safe. Toaster responded to her by saying that electricity tickles. In the challenge, Kite yelled at Toaster to go. Toaster wall jumped out of the maze, making him the second one out of the maze.

Kite asked Casey how the elimination went. She answered that it was great, mostly because she voted Lighter off. Kite agreed to her and was about to say that he was such a big jerk until she saw the newbies, Locky, Television, Fly Swat, and Tiki. She then asked who were they and Gamey answered that these were the new contestants. The challenge was to make a statue of Gamey. Kite and Boxing Glove were the only ones seen doing the challenge. In the challenge, Kite was complemented by Tiki that it was a nice statue. Kite thanked them and asked why were they in the Christmas presents. She was answered that she couldn't remember why she was in the presents.

Globe and Candy were arguing, Candy said to Globe that Kite noticed the three percent difference on her stripes, but Kite did not notice so she said she didn't, even though you can't see her. The challenge was to climb the great tree which is exactly 500 feet tall. Kite told her team (Team Tune) that she can tie a string around her, run as fast as she can, and jump. Because she is a Kite, she can fly. She can fly to a nearby branch and tie the string to it. Then the team can climb on the branch and work from there. The team agreed to do that. So, once Kite tied the string, Boxing Glove said as he pulled the string, seems secure. But the team didn't want him to climb first. That is because Marble said that he might snap the string, and "murder" the team and Kite agreed too which is a little out of her personality because she is always nice. And she agreed to make Boxing Glove go last. Once the team climbed up, she said that she can't go any farther then that. So Boombox had an idea to launch Disc out of the contestant cannon.

She tries to be friends with Tissue before the elimination but fails too because Tissue didn't want any friends. She also calls Toaster sweet after he says she wants her eliminated because he hates her so much. In the elimination, Kite was declared safe. The challenge is to cross the Rapid Rapids, which Kite and Picture looked scared. Later, in order for her team to win the challenge, she uses Toaster as a motor to get ahead. But when Crayon, a Team Time member hit the sign, the sign switched, causing the other team to go to the path of the waterfall. When Soccer Ball noticed the waterfall, the team jumped onto the banks. As Pearly said. But when Kite noticed that Toaster was still on the boat, she risked her life to jump over the waterfall and save Toaster even though she failed and hit the bottom of the waterfall. After losing everyone on Team Tune, she awakens from the bottom of the waterfall and notices that she is alone at the bottom. Worried about Toaster, she saw a shadow. Scaring her, she didn't notice the rope trap and was caught.

Kite was first seen muttering about where Toaster was. Then, she screamed in shock when she sees Tiki, who says that he is her biggest fan. Then, the trap broke and she was free and passed out. After she woke up, Tiki told Kite what happened and then she asked who was the tiki. Tiki said that his name was Tiki. Kite responded that she had a friend named Tiki. Tiki answered that was his big sister Tiki. Kite asked that he knows Tiki. Tiki answered that he watched Object Overload on the glowy box. Kite asked Tiki what glowy box. Tiki said that he will show Kite to the others. Kite asked that there were more of them and Tiki answered that there were tons of them at camp. Then, Tiki asked Kite but Kite told Tiki just to call her Kite, not Ms. Kite. Then Tiki asked her how did she get here. Kite answered that she and Toaster were doing the challenge and then she jumped off and was stranded by the beach and then she got trapped. Tiki said sorry and they needed it to catch the glowy box because he ran away often. Kite asked the TV moved. Tiki said he preferred the name Television. Kite gasped as she remembered one of the contestants being Television as a flash back came to her about Television telling her to that Television told her to call him Television. Kite noticed that Tiki and Television were from here. Tikit told Kite that the camp was close and then, he will explain everything.

Kite was first seen when she offered to help get some of the alliance untied from the ropes they were after doing their "successful cliff dive". She told them to be more careful and walked away shortly after. She was later seen once they found Gamey and he told the contestants he was hosting a reality show. She was the first one to get out in the challenge, trying to save Toaster. When Candy got out, she happily greeted her down in the water. When Toaster got hit off, she tried to catch him but failed, and Toaster exploded, with her saying "Oh, what is my life..?" Before the credits, she remarked how she couldn't wait for the next episode.

She is a playable character in it. She represents one of the only two Object Overload characters alongside Gamey.

Where Kite is from 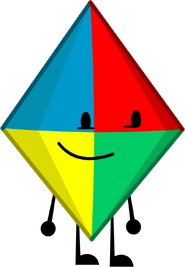 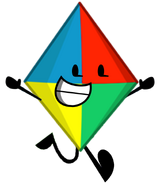 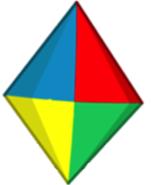 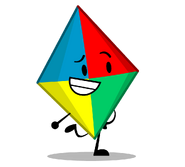 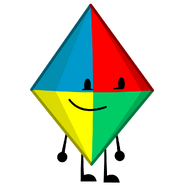 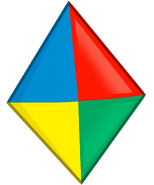 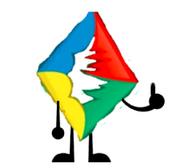 HOW IS SHE STILL OKAY 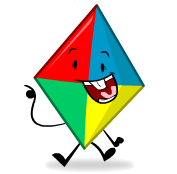 Add a photo to this gallery
Retrieved from "https://objectshowfanonpedia.fandom.com/wiki/Kite?oldid=568248"
Community content is available under CC-BY-SA unless otherwise noted.