Start a Wiki
Kinder Surprise is a male OC made by BrownFamily1108.

Kinder Surprise is mean and has a short temper. 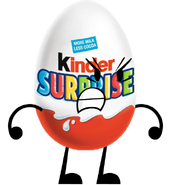 TFFM Design
Add a photo to this gallery
Retrieved from "https://objectshowfanonpedia.fandom.com/wiki/Kinder_Surprise?oldid=560156"
Community content is available under CC-BY-SA unless otherwise noted.