Jet Engine, labeled The Big Piece, is a supporting character and male contestant on Object Havoc.

He was seen with Lighter, although being called a 'Fat Oaf'.

He was seen hanging on the top of the slanted platform, but then let's go and rolls into Binder, Bucket, and Stick, and lost the challenge, making him place 4th/3rd in the challenge.

Jet Engine is the third to last chosen onto a team, and he ends up on the Golden Grenades, although Stick is unsure of him. During the challenge, he pairs up with Nail and Carrot. Carrot points out that there is a card in the tree, although out of reach, so Jet Engine uses his booster to float up to the tree and pull it down. While Carrot is getting the card, a bee stings his leg,(although he didn't bother the bee) causing Jet Engine to let go of the tree. Carrot then goes flying into an airplane. His team lost and is currently up for elimination. 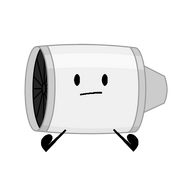 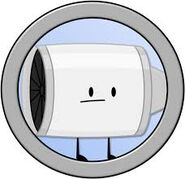 Add a photo to this gallery
Retrieved from "https://objectshowfanonpedia.fandom.com/wiki/Jet_Engine?oldid=499270"
Community content is available under CC-BY-SA unless otherwise noted.