Jar is a male contestant on The Medal Brawl. He is placed on Team N.A.C.S.

His personality is really similar to Spongy, but he doesn't smell bad. He doesn't talk, but makes lots of noises that is annoying to people. Due to his fatness, he walks very slow then any other contestant on The Medal Brawl.

In ¡Hole in one!, Jar was placed onto Bullet's team called Team N.A.C.S. In the Golf challenge, Jar was one of the armless contestants to not participate in the challenge due to a lack of arms. When Bullet hitted the Golf Ball, it broke Jar making him shatter. After the challenge, his team loses.

In ¡Oasis!, Jar was revived by the machine. In the elimination, Jar was safe with four votes along with Shell, and Vase and all three get marshmallows. For the rest of the episode, Jar wasn't seen. His team wins.

In ¡Pirate treasure!, Jar didn't help Team N.A.C.S in the challenge because of his fatness. During the challenge, he starts whining and does nothing in the challenge except for making his noises. When Bullet is trying to get the gold for his team, he was talking to Jar about what he is doing. But Vase told Bullet that Jar can not move. His team loses. At the end of the episode, Jar makes noises again, but at night. 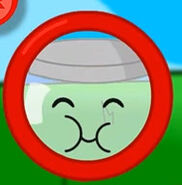 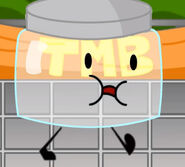 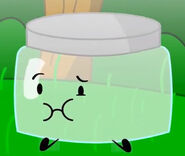 Add a photo to this gallery
Retrieved from "https://objectshowfanonpedia.fandom.com/wiki/Jar_(TMB)?oldid=352774"
Community content is available under CC-BY-SA unless otherwise noted.