How It All Ended

Anko6theAnimator|Antony/Anko6
Hot Dog is a contestant in BOTO. Hot Dog is a casual guy who has quite a few friends. He is best friends with Pizza. He also has a running gag of him missing the box he is thrown at in various ways, like the time it hit Pizza in the face. He is also quite talented at knitting. He placed 5th in BOTO.

Hot Dog is a kind contestant who goes through the game at his own pace. He's also is a talented knitter; he can knit an entire car in minutes. Other than that, Hot Dog is a caring person, and his best friend Pizza's elimination really upset him.

In How It All Began he teamed up with Party Hat, Boom Box, Shieldy and Pizza. He was in the car that crossed the finish line, but he was in the back seat, so he didn't win.

In B.O.T.O. The Videogame Hot Dog was chosen onto Pizza's Team. During the challenge, he was killed several times by barrels, and reacted to Scissors' teamkilling by giving her a taste of her own medicine. He made it to the Boss Battle, but the Hacker killed him with a laser. As Shieldy defeated the boss, his team was up for elimination.

In The Ever Convenient Objects' Shopping Mall Hot Dog was helping Pizza name his team, but Scissors called them out for not including the rest of their team. At the elimination, he and Chocolatey were both safe with 14 votes each. During the challenge, he went to the toy store. He was second to Pear for buying the most things, and his team was safe from elimination.

In BOTO's Next Star Hot Dog was first seen after the elimination, hearing Pizza's reaction to the challenge. He teamed up with Shelly, who was on the opposite team, to sing the song "Better Tommorow" getting an 18 out of 30. After the challenge, his team was up for elimination.

In Go, Battle Monster!, he was saddened by Pizza's elimination, and also got mad at Controlly for giving him an oatmeal raisin muffin.  He was a semifinalist in the challenge though.  He looked forward to the contestant vote that came after.

But Pizza eventually rejoined in Downhill Disasters, and Hot Dog was happy.

If Hot Dog appeared in your fan fiction, you can add your own details about him here!

Hot Dog appears in the inside of Martian Tripod.

Hot Dog managed to survive being thrown in. He was shooting the tripod with an AK-47, but it consumed him. He managed to avoid the jaws. 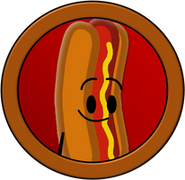 Retrieved from "https://objectshowfanonpedia.fandom.com/wiki/Hot_Dog?oldid=607288"
Community content is available under CC-BY-SA unless otherwise noted.