Gum is a OC from TheEndero but is now owned by Jay28jay2.

Gum is very bossy. He enjoys manipulating other players into doing what he says, mostly because he believes that he is the most important player every time. This causes many of the contestants on the show to have a major dislike for Gum. While he is mostly stuck up, he also is very quiet after his elimination, saying only phrases of disagreement or anger. Gum hates his family members, hates his sister Gum Bally and his babysitter "Dolly". He's a big bully, likes to tease kids and get on their nerves. He uses his I-phone a lot of times, In Season 3, Gum wants to redeem himself for all the trouble.

In Flare Shiny Mania Gum isn't shown to much. In his first confessional he says that he forgot his alliance members.

Gum is the 2nd antagonist of the Object Chaos 2. He had alliance with Moon, but when he found out, it got broken. Gum got eliminated, leaving Wand as the main antagonist..

Along with Milk, Gum debuted into Object Craziness in Episode 14. He soon became the Main Antagonist whilst being the main reason for the eliminations of Potatoey, Map, Tennis Ball, Mustache and Helped for Match's. He got sussed out as soon as he joined the show but this didn't stop him. He was eliminated in Episode 21 with Milk and he got 44 votes to go. 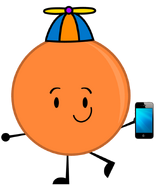 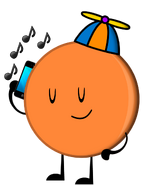 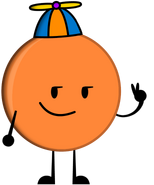 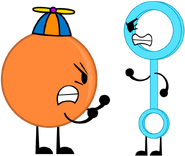 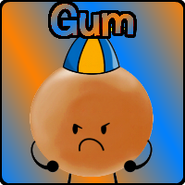 Add a photo to this gallery
Retrieved from "https://objectshowfanonpedia.fandom.com/wiki/Gum?oldid=433286"
Community content is available under CC-BY-SA unless otherwise noted.