Green Rocky is an OC created by Cutiesunflower. He has his own alliance with Cosmic Brownie and Green Ice Cube, but it might expand soon. He also appeared on Race to Reach the Roof Wikia Edition, Object Hawaii, and even Object High.

He appears to be a green colored rock. Originally, his body is more darker green than what he looks like now. In his BFB redesign, he has lighter green colors instead. In his current design, his body no longer looks like Rocky.

He has a nice personality, however, he can be sometimes mean. He hates being sick and avoids really yucky food. Unlike Rocky, he talks really well and is a very good runner. He is always Happy because he is a Rocky Clone, but he can sometimes frown when anything bad happens. Originally, he was considered a silent character and did absolutely nothing, like Rocky from BFDI. Although he is a nice and cute Rocky Clone, he can be stupid and dumb at times due to having no arms and being weak.

Green Rocky had a chance to debut in Battle For Wish Bush along with other recommended characters until Battle for Wish Bush was cancelled.

Green Rocky was a Recommended Character in that episode.

Green Rocky was in all three Random Characters Hurt and Heal seasons. He placed 3rd in the first season, 1st and the winner of the second season, and 15th place in the third season.

In ROTBFDIWP, Green Rocky appears as a recommended character recommended by Cutiesunflower. He had a chance at joining the game, but he got 0 votes making him not join. He didn't appear in BFTWP either.

He will appear in the upcoming object show, Object Sun as a contestant.

In the song challenge, he got 18/20 being tied with Bubble Wand, and he lost the tiebreaker. He is placed into Bubble Wand's team and he is UFE along with the others.

He was safe with 1 vote, and for the cake challenge, his cake got a 7/10, but his team lost and he is UFE once again.

Episode 3: Are you Smarter than a box?

He is safe once again, and he didn't get any votes this time. He got 3/5 in his test.

Like the last episode, he didn't get any votes, the teams were disabled, and he is tied with 58 points, along with Bubble Wand, and The Computers Brothers of Paine, with one point below Flower Grassy.

In the fifth episode in the challenge, he placed first out of everyone, getting himself bones, and he has 74 points out of everyone still in the game, and he isn't up for elimination.

Green Rocky didn't do really good in the obstacle course due to being hit by a dummy without arms. He's still safe from being in the danger zone though.

Due to his lack of arms, he stomps all of the bugs, but he only got 50 bugs killed, resulting him a failure and a Lose Token, making him be up for elimination.

He was eliminated with 2 votes, but due to his Lose Token, his votes went to 4, and he's still eliminated. Inside the TSB, he barfed many times due to his elimination.

Green Rocky, along with the other contestants who have been eliminated, had a chance at rejoining the show.

He got 3 votes, making him get one more than Moneybags, and rejoined the game. He placed 3rd in the challenge due to going into the pit, and he only has beaten Baseball Cap (who got his 3rd Lose Token), he was up for elimination.

He was safe with only one vote, and he's safe. He's in the final three, along with The Computers Brothers of Paine, and Bubble Wand, and have a chance to win BTWTUP.

With four votes, he became the winner of BTWTUP and won Cutie Island as a prize, despite being a rejoiner.

Green Rocky with a Shadow

Being standed on by Grassy. 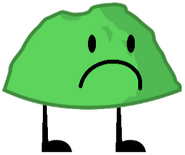 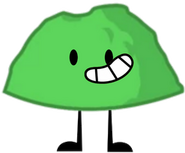 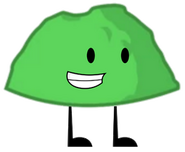 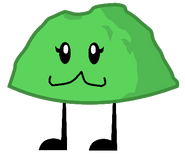 with a Drawn Face

Getting rubbed by Flower Grassy. 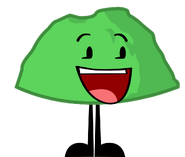 Remake of him by BFDIMessUps.

In Battle for BFDI. 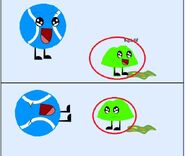 Fan made comic with BTB 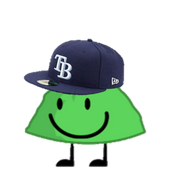 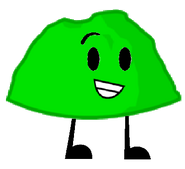 BM44's pose.
Add a photo to this gallery

Retrieved from "https://objectshowfanonpedia.fandom.com/wiki/Green_Rocky?oldid=569063"
Community content is available under CC-BY-SA unless otherwise noted.