Teardrop (Love interest) Everyone (except enemies)

Orange, but not purple or green like an actual grape!

Grapevine Vanellobi Aiko, labeled The Pie-face or The Hexakosioihexekontahexaphobe, is an Independent Free-Spirit, which means she is unique and can think outside the box.

Grape is an orange stickfigure with hair similar to Luna Girl's, clothing similar to Webby's, And has Mechana Bouncy as her Mechana Power, since she is on Team Mechana.

So far, Vanellobi has not yet had any deaths.

Where Grape is From 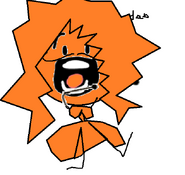 The photo that made Grape yell WTF?! 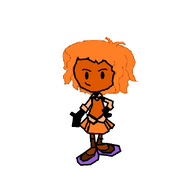 Grape's BFPE look.
Add a photo to this gallery
Retrieved from "https://objectshowfanonpedia.fandom.com/wiki/Grape_(BFB)?oldid=465203"
Community content is available under CC-BY-SA unless otherwise noted.