Fridgey, known as The Animatronic Entertainer, is a character on The Fight for Magic.

Fridgey is an animatronic entertainer, so it's basically his job to be happy and entertain people. He can sing, dance, serve pizza and make jokes. Usually, he does his best to make people happy. However, sometimes that isn't the case. As it is with animatronics, once the clock strikes midnight, he will change for the worse. His happy-go-lucky facade will wash away as he becomes violent and seeks to kill anything he sees. In this state, his demeanor will drastically change, down to his appearance.

A crucial ability for all animatronics to have. Fridgey can scream loudly at people like a banshee, provoking fear. With correct timing, Fridgey can cause even the people with the strongest wills to faint, and for weaker people, he could send them into death lickity split. However, this isn't Fridgey's favourite way of killing, as he usually prefers strangulation or cramming the victim's throat with chunks of delicious people until their lungs collapse.

Fridgey has a chip in his chest cavity that emits a low ringing noise. This low ringing noise can alter the way you see Fridgey. Most of the time, he used this ability to show his happier form in day, while at night, he turns it off, to reveal his more bloodied form. He can even change other things, like how the ground around you looks, or how other people look.

The weaknesses of this chip is that if you can't hear the ring, then he cannot change his form in your vision. So, wearing noise-cancelling headphones or just being deaf will make you be able to perceive his true form. However, to retaliate, Fridgey, makes sure to keep an eye out for anyone doing this, and will promptly 'remove' them. The chip also cannot alter how you fdeel things, so if you try and touch him, you can still feel his cold, rusted exoskeleton.

Fridgey and Potato are best friends. They share alot of interests, including being really creepy. They have known eachother for most their life.

Much like Potato, Fridgey is also great friends with coal for liking being creepy. They also both like murder.

Fridgey is friends with Plug due to their shared connection of being robots. Fridgey looks up to Plug, as she is pretty gnarly and has some fancy weapons that Fridgey is envious of.

Much like Plug, Calculator is also Fridgey's friend due to them both being robots. Fridgey says that Calculator is a better little brother than Mini-Fridgey.

Icicle is Fridgey's biggest fan, and was who inspired him to start killing in the first place.

Fridgey finds these two creepy for their obsession with experimenting, and is very worried that they will try to experiment on him one day, So. he chooses to avoid them.

Fridgey is a standard top freezer fridge, made of stainless steel. The freezer has double doors, each door having a single eye hole carved into each, two purple cheeks placed on each, two thick, dark purple eyebrows, as well as half a mouth carved into each door, so when his the freezer is closed, it makes a mouth. He has white, sometimes glowing eyes and purple irises, with a red ring inside and a white dot in the centre of the pupil.  He also dons a tall, black top hat with a purple ribbon tied around it. The bottom layer has a normal sideways door with a speaker slightly above the centre of it, and a handle on the right hand side. Out of the sides of his body, he has arms, and out of the bottom he has legs.

Once it turns night, Fridgey takes on a much grittier appearance. His eyes and teeth go from a perly white to a murky yellow, his cheeks and eyebrows go from standing out to looking more like they were shoddily spray painted on, his previously semi-normal looking limbs rub off to reveal visible servos and motors at every joint and his previously white, stainless steel exterior becomes a lot more dirty and scratches emerge all over him, while clumps of "rust" gather around his edges 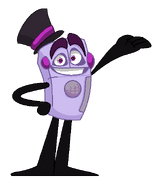 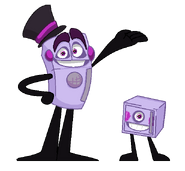 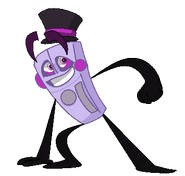 Fridgey, along with Potato and Coal

Fridgey's Old Design. He looked more like a normal object back then.

Fridgey being brutally abused by Moneybags. 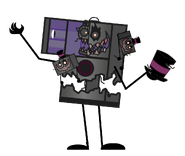 A non-canon design for Nightmare Fridgey 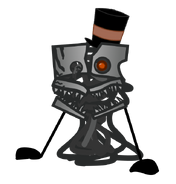 A design for Molten Fridgey 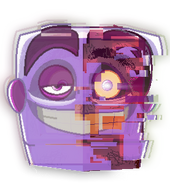 Fridgey transforming into his eviler version at night. 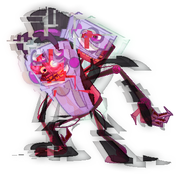 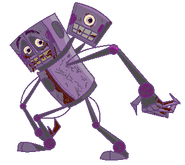 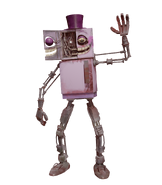 Fridgey as The Terminator (Art by EvanVizuett)
Add a photo to this gallery
Retrieved from "https://objectshowfanonpedia.fandom.com/wiki/Fridgey_(TFFM)?oldid=499954"
Community content is available under CC-BY-SA unless otherwise noted.